Online conference for the donors and international technical support projects: “The state of local self-governance in Ukraine after more than two months of war” 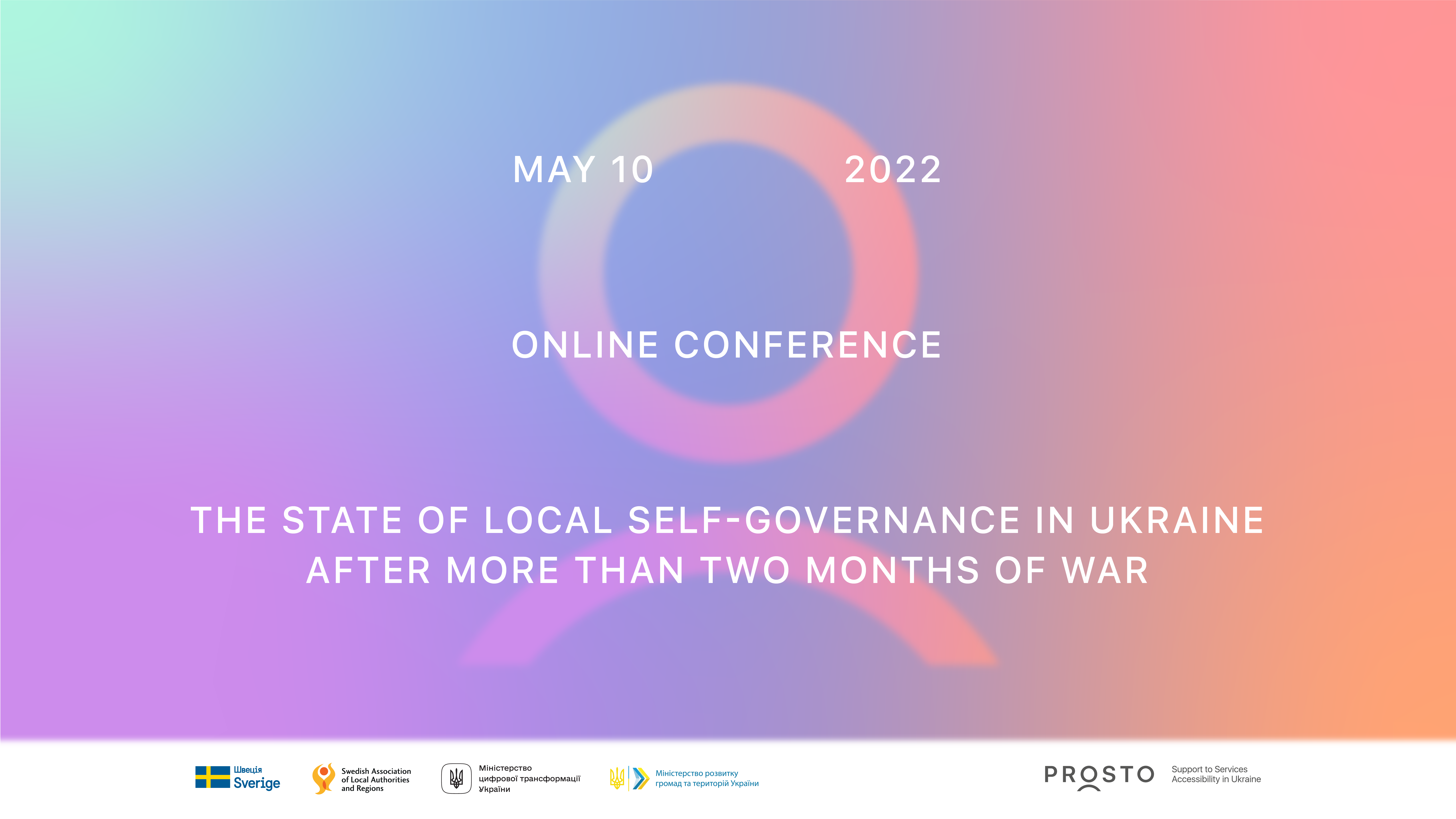 May 10, 2022. The event intended to bring together international organisations and experts in the field of decentralisation and local governance. The aim was to present and discuss recently collected data on the state of local self-government, and to identify efficient ways to assess and meet the needs of hromadas.

“Every day, while the whole country is fighting against the Russian invasion, the local authorities all over Ukraine demonstrate outstanding resilience and solidarity with each other. We see a lot of examples where the hromadas organise their defense systems, logistics, helping displaced persons, and backing up the home front. These are heroical actions, that are bringing victory and support spirit of the whole nation. When we look ahead, we see that significant assistance must be provided to local self-governments for the reconstruction of housing, schools, hospitals, and the social and administrative infrastructure of communities. Currently our main efforts target the increasing humanitarian needs.  But we also actively plan for a long term recovery and reconstruction. One example of that is the recent International Donors' Conference that was hosted by Poland and Sweden, in cooperation with the Presidents of the European Commission and the European Council, during which over 6.5 billion dollars were raised.” - stated Cecilia Chroona, Counsellor, Head of Reform Cooperation Embassy of Sweden to Ukraine, while opening the event.

The Ukrainian MP, head of the subcommittee on administrative services and administrative procedures, Larysa Bilozir emphasised that the need for assistance during the war far exceeds the requests. Therefore it is important to set the right priorities and critically assess the requests. According to her, hromadas urgently need support in addressing the basic needs of IDPs: food and shelter.

“How can our international partners help Ukrainian hromadas? The number one issue is humanitarian aid. There is a shortage of food for IDPs. If we talk about the need, it’s approximately 10 thousand tons a day and 20 million packs a month for IDPs. Another problem is the accommodation for refugees. Local communities do not have the possibility to spend funds on the reconstruction of existing housing facilities. Because of martial law, they cannot spend funds to renovate and buy the necessary equipment to make them residential. The help of the international community would be of much help hereto”, - Larysa Bilozir said.

PROSTO Project Consultant Susanna Dellans presented a report with findings and tendencies on the current situation in hromadas (based on monitoring with interviews of 140 hromadas). The monitoring focuses on the work of Administrative Service Centres (ASCs) and looks into the ASCs ability to provides administrative services, and the ASCs’ changed role and mandate to support IDPs. It also illustrates the security situation, humanitarian needs, gender, and inclusivity aspects laid out on geographical maps.

The report highlights that in wartime, many LSGs have proven to be reliable “islands” and become more and more important for the functioning of the local communities. It also identifies poor efficiency of the coordination of aid received from abroad. Sometimes smaller remote and rural hromadas do not receive any support at all, although they need it. Many organisations and regional and local coordinators of humanitarian aid call for a better coordination.

The expert of the Swedish-Ukrainian Project "Support to Decentralization in Ukraine" Jasmina Djikic delivered a presentation on the threats to local self-government finances.

“Many hromadas do not yet feel the economic impact of the war because some businesses have paid taxes beforehand to help the government finance the war efforts. But many businesses collapsed, revenues are dropping and according to different forecasts, the drop in national GPD varies from 35% to 45%. Because of emergency measures, the national Government has cut planned grants to municipalities and oblasts by 55 bln UAH. This was accounting for 12% of local government planned revenues”, - Jasmina Djikic said.

During the conference, participants pointed out that hromada’s tax revenues may get disproportional because of the large number of displaced persons and evacuation of businesses, suggesting the government and hromadas might need to introduce new mechanisms in the taxation system.

Participants also discussed possible methodologies to define the basic needs of the vulnerable groups of people and shared the relevant best practices.

One of the key messages recognized by all participants is that support for hromadas must not be put on hold until the military hostilities have been put to an end. Continuous capacity building support to hromadas (where the security situation allows) creates a better ground for rapid recovery after the war and makes a significant contribution to Ukraine's victory over the occupier. The international community must continue involving and supporting the local self-governments and not only with humanitarian aid.

In the closing remarks, Vasyl Sehin, PROSTO Project policy coordinator, once again highlighted that the Decentralisation Reform has been successful not only in peacetime but also under martial law. He also stressed that up-to-date information on the state of affairs in communities is critical when deciding which areas of support should be prioritised.